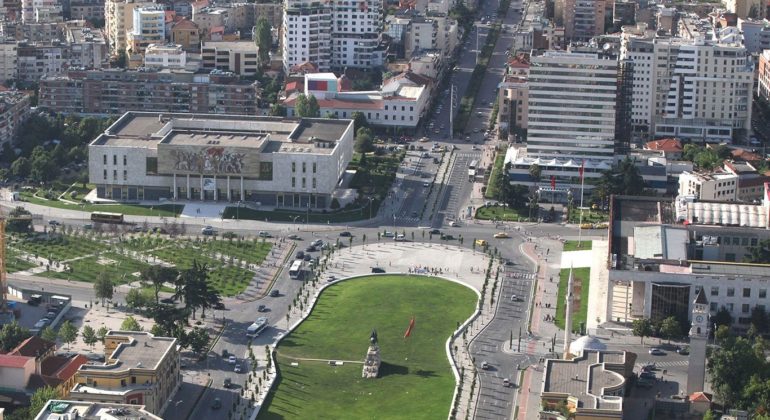 In Albania, Tech Attempts to De-Balkanize the Balkans

On a balmy, spring evening in Tirana, around three dozen Albanian entrepreneurs are sat in a room of the same building where secretaries once committed communist government files to the software. The presentation they’re about to see might just be their best-ever chance at funding. The visitor: South Central Ventures, a recently-assembled fund that’s based in Belgrade, Skopje, and Zagreb. €40 million of public and private money is on offer for early-stage injections, managing partner Tatjana Zabasu tells the audience. It’s a chance to bring Balkan tech together.

Few in the room, part of the public/private Protik ICT Resource Center, are under any illusions: these are early – very early – days for the tech community in Albania. Indeed as more than one entrepreneur will tell me that evening, the whole crowd is barely three years old. But some success stories are beginning to appear in the small country. And, perhaps more excitingly, they could be a chance to cross borders that, for decades, were shut tighter than any others on Earth.

Albania is a small, kidney-shaped country at the foot of the Balkans, located in Southeastern Europe. It has a population of just under three million, and a GDP per capita barely prodding at $5,000, aligning it with similarly developing neighbors like Macedonia, Montenegro, Serbia, and Kosovo.

But while those countries became part of Yugoslavia in the aftermath of World War Two, Albania fell into deep isolation, at the behest of its Marxist-Leninist dictator Enver Hoxha. His regime banned religion, beards, and almost all foreign travel. So afraid of ‘revisionist’ outside influences was Hoxha, that he had 750,000 machine-gun pillboxes erected all around Albania. They are still to be seen today – beside roads, places of worship, and even public parks.

While people across the rest of the Balkans received traditionally high technical training under Yugoslav, or Soviet, rule, Albania remained an educational backwater. Early human rights successes, like gender equality and healthcare, were squandered from the 1960s on as Hoxha severed ties with all of his communist allies. By the time his Party of Labour fell, in 1992, Albania was Europe’s poorest nation.

Almost a quarter of a century on and the legacies of the isolationist rule are still evident, despite stabler politics in recent years. In fewer places is it felt more acutely as in SME development, which requires not only an injection of cash and tax breaks but a complete cultural shift.

“We have this way of learning where students are passive – there are no labs,” Vasken Spiru, a local ecosystem facilitator, tells me. “With coding, it’s like trying to write Java on a blackboard.”

“It comes out of a society where the majority of young people still wants to go and work for the state,” Jakob Modeér, a Swedish-born but longtime Balkan-based expert, tells me. “If you come from Britain or the U.S. it’s almost amusing. It’s clearly in the mind of people and their parents that state employment offers you stability.”

Modeér is Spiru’s colleague at swisscontact, whose SECO Entrepreneurship Program is trying to raise interest in startups and entrepreneurialism across the region. That we meet at a trendy café in The Block, a district of Tirana famed for its past as the hermetically-sealed neighborhood of Hoxha and his closest confidantes, is poignant. Today The Block is a vibrant, variegated humdrum of bars, restaurants and hotels. If The Block can change so quickly, Modeér asks, why can’t Albania?

“If you’re not a critical person, you don’t see problems. If you don’t see problems, that’s what a startup is all about,” he adds. “These are things that don’t come easily in such a hierarchical society. We need to break it down a bit. You do that with smaller groups – there’s no big bang.”

Neither is there a problem with space. Whole swathes of central Tirana, including some of its most famous communist-era buildings, lay eerily empty today. Even the Protik building, with its vast history and modern tenants, lays half-bare, its top floor empty aside from a blackboard, on which tech buzzwords are scrawled. “No,” Modeér says, frustrated, upon seeing what should soon be an accelerator. “We definitely don’t have a lack of space.”

Success stories are what Modeér, and Albania craves. Recently it got a few. 123.al is a discounts site founded by Laidi Ferruni, who recently launched Ireland-incorporated Quibli, an events marketplace. Shpi.al, a real estate portal, was founded by young entrepreneur Tomi Kallanxhi, with just $400.

Beyond Albania’s borders, in ethnic-Albanian Kosovo, Gjirafa (‘Giraffe’) recently became the first Albanian-language search engine. Altogether it has raised $2.5 million, including sums from Prague-based Rockaway Capital and serial investor Esther Dyson. Founder Megrim Cahani, who spent 12 years in in New York City, tells me that finding a viable model was a conundrum.

“It was very difficult because there are two really big problems in the region – first is the region in terms of macroeconomic indicators – GDP overall is very low compared to developed markets,” he says. “Then there’s the population. It’s a very small market with tiny purchasing power. Plus the economy of Internet is not very developed.”

Web penetration in both countries is pretty good, however, with Kosovo at 88% and Albania around 75%. “We recognize that the market is small,” adds Cahani. “It’s small if you want to grow the product horizontally. But if you’re doing a few basically and you grow vertically, the market is big enough. We want to be the leader in news, advertising and e-commerce. We don’t have to be top-of-the-line Amazon to cut it.”

In total there are 12 million Albanian speakers in the Balkans and diaspora populations in North America and western Europe – not including millions of undocumented speakers in Turkey. Gjirafa recently hired ten more staff to add to its team of 22. An upcoming office in Tirana will accommodate ten more, with plans to move into Skopje, Macedonia’s capital, Slovenia and Prague. “Gjirafa can give Albanians services that are so basic elsewhere but not here. A lot of ten-year-old services still aren’t here yet.”

At the presentation in Tirana, Zabasu has turned her focus on the audience: what are the advantages of the Albanian scene, she asks. Developers’ wages can run very low, Ferruni says: “An average one could be just €200-300. Advertising is really, really cheap here too, so it’s easy to get to market and gain customers very fast.

“Even in Macedonia, which is right next to us, the cost-per-click can go up to a dollar,” he adds. “But here the average is just $0.02-03. So it’s really easy to gain traction.” Facebook penetration is also high in Albania, another person adds, at 1.3 million users. It’s a good platform for change.

The aforementioned lack of technically-skilled personnel is a problem, Modeér admits. But that drawback might actually be a chance to do things better, cooperatively: “If you’re set on the global market you will need resources. So here, you have to ask: which countries have coders and programmers? Some have more coders than marketers. Albania is very strong on marketing but it has no coders. We should think as a region.”

And that, it seems, is precisely what many in the local ecosystem are doing. SCV is looking at investing in Croatia, Bosnia, Serbia, Kosovo, Montenegro, Macedonia and Albania. And EU money from Bulgaria and Slovenia is beginning to sniff out talent in the region, too. Tirana itself boast several startup resources committed to looking beyond the country’s borders, such as Startup Grind; Oficina; GARAZH (‘Garage’); Talent Garden and Protik.

Balkan adroitness in second languages could provide another key opportunity for collaboration. Most Albanians speak excellent Italian (from Durrës it takes a night-ferry to get to Bari), while Kosovars, thanks to old family links, tend to speak good German. Other areas promote English, Russian and more.

“I think collaboration is key between Albania and the other nations in the region as we grow as a cluster together,” Erkens Gjini, Oficina’s Business Development Manager, tells me. “If we can identify our advantages and symbiotically use them, then we can challenge other nations and become a global factor.”

Neither Gjini nor any of the entrepreneurs I spoke to voiced concerns about dealing with Serbians, Macedonians, or any of the region’s other nationalities, whose dividing conflicts and enmities have coined the very term ‘Balkanism’ to mean the cleaving of deep ethnic, religious and political lines. Tempers often flare on a governmental level even now. But, adds Gjini, which is not replicated in the boardroom: “I have been to Serbia and have many friends who share the same idea. All this political propaganda is used to secure those votes from the ultra-nationalist, which do not represent the voice of the nation.”

After the event, I speak to Bashkim Sykja, Albanian director of entrepreneurship policy at the Ministry of Economy. He stresses Tirana’s encouragement of entrepreneurialism, and its opportunity to bridge old divides. “ICT helps the Balkans in terms of connectivity among the countries,” he says. “If we want local companies to become competitive in this global market, we must make sure ICT is considered one of the key sectors.”

That will help enthuse state institutions and banks to invest in startups, something Spiru admits is sorely lacking right now. “It’s a chicken-and-egg situation,” he says ruefully. “Why should the government invest when there are only a few startups here?” More money would spur investment in online payments, he adds, which would inspire a wave of e-commerce firms to set up shop – usually the first line in ecosystem development.

Working across borders will, above all, adjust local entrepreneurs to the global market and its requirements adds Modeér. He tells me about an accelerator that brought Kosovars from Skopje to Serbia without a hitch, before adding, “We can bring the Balkans together but through the startup community. The real mindset change will come when you start working for a German customer. Not your cousin down the street, who will make concessions on timescales and quality. A German will never do that. Quality, price, delivery time. Reality.”

Despite what they might tell you, the people of the Balkans share a huge amount of their customs and culture. Many national dishes, for example, share an Ottoman heritage, while similar adherences to Sunni Islam and Orthodox Christianity have swept up from empires from the south, west, and east for centuries.

There are legends, too, which have crossed borders. Take that of Muji and Halili, highlanders who, having drunk the milk of a fairy, challenged each other to lift and hurl boulders three miles away. A modern, post-communist Balkans may have endured a litany of wars, genocides, and political repressions. But finally, it appears a new regional generation is ready to band together, pick up the rock of industry together and hurl it as a globalized market.

“Everybody here has their competitive advantage,” Modeér adds. “This is grassroots, so it will win. It has to be from the bottom up, not from the top down. The only stability you will find is in the private sector.”

Find it first on StartFlow

StartFlow is where early adopters find lively, imaginative tech before it hits the mainstream.
Sign Up Now